Handcrafting Some of the Country’s Finest Breads Since 2010

Hearth Artisan Bread’s founder and owner Peter Nyberg has been a professional in the baking industry for more than 20 years. He is a graduate of L’Academie d’Cuisine in Bethesda, Maryland, where he received his French culinary degree. During his time there, Peter completed an externship at the Occidental Restaurant in Washington, DC under the tutelage of renowned chef Jeff Bubin (Vidalia).

Peter began his professional career in artisan breads at Marvelous Market in Bethesda, during which time he created breads for Jean Louis Palladin’s restaurant at the Watergate Hotel in Washington, DC. In 1992, he was recruited as head baker to open Empire Baking Company in Dallas, and later became their general manager. From there, Peter went to Atlanta to work for the Buckhead Bread Company, part of the Buckhead Life Restaurant Group (Buckhead Diner, Chops, Atlanta Fish Market).

In 1995, Peter was once again recruited for a start-up venture. Together with Phil Romano (Fuddruckers, Romano’s Macaroni Grill) and Brinker International, he opened EatZi’s Market & Bakery, a chain of high-end bakery and gourmet take-out markets, headquartered in Dallas. After nine years at EatZi’s, Peter relocated to Vancouver, British Columbia and opened MIX the Bakery, which received 1st Place in The Vancouver Courier’s Readers’ Choice Awards in 2004, and again in 2005, 2006 and 2007.

Most recently, Peter worked as senior bakery coordinator and research and development for Whole Foods Market in the North Atlantic region. In 2007, he was awarded the national corporate “Top New Program Award” for creating the company’s first international, in-house scratch bread and pastry program at the Kensington store, located in London.

In addition to being the founder/owner of Hearth Artisan Bread, Peter served as an adjunct professor at Johnson & Wales University in Providence, Rhode Island in the College of Culinary Arts International Baking and Pastry Institute and continues to operate Bakery Resource Consulting. 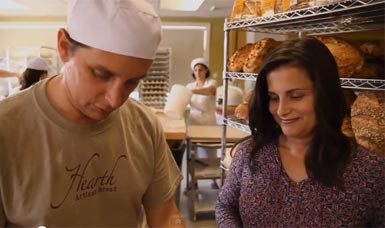 Hearth’s co-founder and co-owner Nicole Fichter Nyberg’s sales and marketing career began in 1991 when she joined a small software company in the Washington, DC suburbs. Since then, Nicole has held sales positions within multiple Fortune 500 companies. Prior to opening Hearth Artisan Bread, Nicole was a territory sales manager for a global pharmaceutical corporation in their immunology division.

Nicole received a Bachelor of Arts degree in English with a minor in Journalism from Clemson University and holds a Master of Science degree in Marketing Management from The Johns Hopkins University.